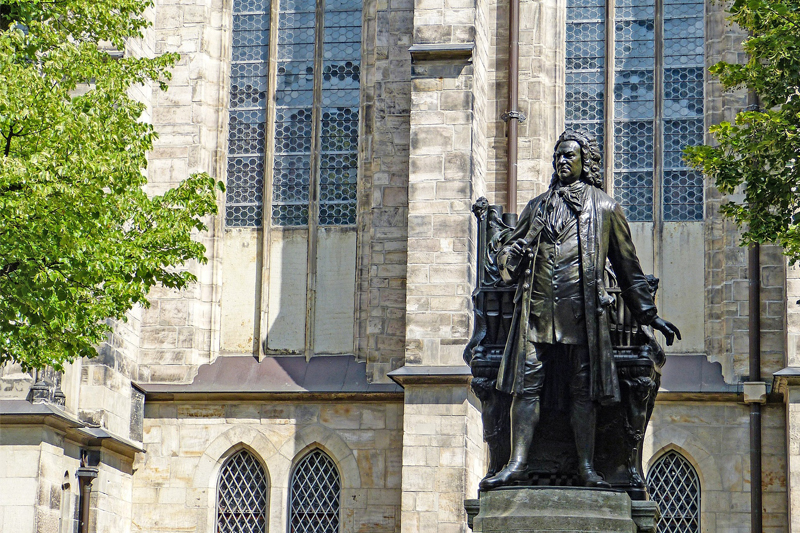 Johann Sebastian Bach was not only the cantor of St. Thomas’ in Leipzig who composed endless immortal works to the glory of God and of the town. For a full fifteen years of his professional career, his main job was court employee: first of all as organist and concertmaster in Weimar, and then as kapellmeister in Köthen. Even when he was Thomaskantor, he continued to garner honorary court titles: in 1729 he was appointed associate kapellmeister to the duke of Weißenfels and from 1736, at his request, »Royal Polish and Electoral Saxon Court Compositeur«. His famous guest performance in Potsdam may also have been aimed at becoming honorary kapellmeister to Frederick the Great.

Bach’s work at the courts and for rulers produced numerous and particularly diverse compositions – splendid music for celebrations, glitteringly virtuoso instrumental works of every imaginable style and genre, and innovative church music. In short, what makes the works of Court Compositeur Bach so attractive is their extremely broad range of forms – ideal material for building a very varied Bach Festival programme.

We have created four concert series devoted to Bach’s works for Weimar, Köthen, Dresden and Berlin. In a fifth series, »Bach & Friends«, we get to know works by his court musician friends. These concert series have plenty of highlights in store and offer a chance of musical discoveries. We will listen in on Bach the Weimar court organist and how he ›drinks in‹ and adapts Vivaldi’s violin concertos and »astounds« the congregation – meaning you! – with his bold chorale accompaniments. In a five-part cycle, we will be carrying on where the 2018 Ring of Cantatas left off, as all the Weimar cantatas will be performed by four ensembles, each of which follows a different performance practice philosophy. I am especially excited that we will be staging the legendary contest between the Weimar court organist, Bach (Andreas Staier), and the Paris organist, Louis Marchand (Ton Koopman).

As part of the Köthen series, Nuria Rial will be taking on the role of Anna Magdalena Wilcke, later Frau Bach, and we will be hearing music for the birthday and funeral of Bach’s favourite ruler, Prince Leopold. More opulence is in store when Lautten Compagney invites the audience to the table – in a staged production of Bach’s »Jagdkantate« and »Schäferkantate« (hunting and pastoral cantatas).

In St. Nicholas’ Church, Jordi Savall will be taking us to Berlin and the world of the »Musical Offering«, as will Kristian Bezuidenhout and the Freiburger Barockorchester with all the virtuoso works that Bach composed for the city on the Spree. Some of the opulent »Huldigungskantaten«, or cantatas of homage, by the Saxon Court Compositeur Bach which later supplied the music for the Christmas oratorio will be performed on stage, some in their original venue on Leipzig’s Market Square. And of course, the B Minor Mass will form the traditional close to the festival’s events, this time with the Tölzer Knabenchor conducted by David Stern and a performance practice that is intended to imitate that of Bach’s right down to the placement of the musicians. Look forward to a surprise!

Bach’s Passions will also be performed in fresh new formats. I am delighted that the English ensemble, Solomon’s Knot, who appeared at the 2016 Bach Festival to great acclaim, will be returning with the St. John Passion in St. Nicholas’ Church and that we will also have the opportunity to see the piece – as well as the Magnificat – at Leipzig Opera in ballet form. The St. Matthew Passion will transform the church of St. Peter’s into the hill of Golgotha in an extremely moving stage production from Bonn.

Since one central concern of us at the Bach Archive research institute is to also allow audiences at the Bach Festival to hear the latest findings, we are keenly looking forward to the forthcoming performance of Gottfried Heinrich Stölzel’s Passion oratorio, »Ein Lämmlein geht und trägt die Schuld« (A Lamb Goes and Bears the Guilt) by Hermann Max and his Rheinische Kantorei. As we recently discovered, Bach performed this fascinating work in St. Thomas’ Church in 1734 and we intend to probe his enthusiasm for his colleague from Gotha for the first time again at the original venue.

Of course, our well-provisioned festival agenda is also studded with a number of select chamber music pieces, some of them in night-time concerts, some in unusual places. Kristian Bezuidenhout, our artist-in-residence, will shed light on Bach as a keyboard virtuoso from several angles in two recitals, one a duet with Isabelle Faust. Sir András Schiff will continue his journey through Bach’s »Clavier-Übungen«, and Pierre Hantaï will be devoting his efforts to the »Goldberg Variations«. The intimate chamber music concert by Ton Koopman, his wife Tini Mathot and Bach bass-singer par excellence Klaus Mertens, promises to be a very special experience. They will be celebrating 40 years of performing together – reason enough for the City of Leipzig to award that unique singer the Bach Medal during the concert in the University Church in recognition of his incomparable service.

So, as you can see, an extraordinarily diverse Bach Festival awaits us, enriched as always by concert trips to other Bach venues, a series of lectures and an exhibition in the Bach Museum which shed light on the festival theme and provide surprising insights into the research workshop of the Bach Archive.

But away from the churches of Johann Sebastian Bach, be sure not to miss the works of his great ›advocates‹ in Leipzig, Felix Mendelssohn Bartholdy and Clara and Robert Schumann, in the places where they originally lived and performed. I am very glad that thanks to our excellent collaboration with the Gewandhaus and Mendelssohn House we are able once again in 2019 to offer a broad focus on Mendelssohn, including concerts by the Gewandhaus Orchestra conducted by Herbert Blomstedt and a performance of the famous »Christus« fragment.

I am also grateful that so many partners, patrons and sponsors from the city, business and catering sectors are again contributing to the Bach Festival. Without them, the Bach Festival would not be such an attractive and all-round tourist experience for the numerous visitors from Germany and elsewhere – and a festival that, despite its increasing size, remains true to its guiding principle of doing the utmost to fulfil the individual needs and expectations of Bach pilgrims from near and far.

I wish you a warm welcome to Leipzig!

Executive Director of the Bach Festival